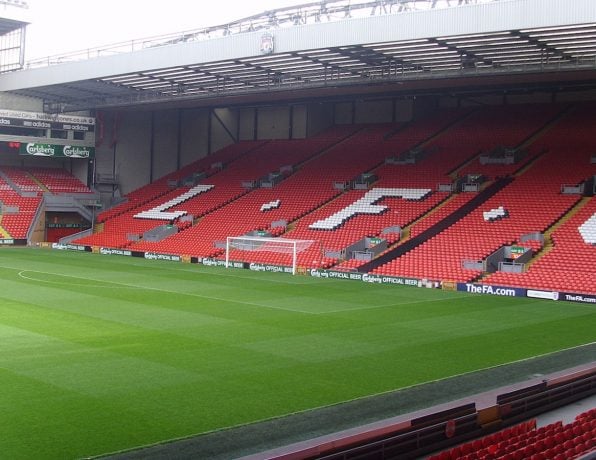 Getting to Anfield Stadium in Liverpool

Are you planning to visit the city of Liverpool and explore the famous stadium of Liverpool Football Club? Or perhaps you have tickets for an upcoming match and want to tour Liverpool before kick-off? Whatever your reason for visiting our incredible city, we have no doubt it will be a visit to remember. Liverpool offers an abundance of things to see and do, none more so than exciting activities based around the city’s football connection.

Liverpool isn’t a huge city, but if this is your first visit, you may struggle to find your way around. To help make your trip a smooth experience, we have compiled a list of how you can get to Anfield Stadium, the home of England’s most successful football club.

Liverpool has an excellent transport infrastructure and is one of the largest cities in the North West. Getting to Anfield is relatively simple whether you’re travelling by car, bus, train or other. With Liverpool FC boasting millions of international fans, its home is near some of the country’s largest airports, and the city is very welcoming to visitors.

Lime Street is very much the focal point of Liverpool and one of the key gateways to the city, with around 20 million passengers venturing through the station each year. The area around Lime Street has enjoyed significant regeneration recently and is the perfect place to start your Liverpool adventure. As soon as you step off the train and head out of the station, you will be greeted with amazing views of St George’s Hall and the iconic Radio City Tower (aka St Johns Beacon). If you choose to travel to the city via train, you will be happy to know that Lime Street Station is Liverpool’s main station and connects to railways throughout the country. Liverpool Central Station is another popular station that you can find just a short walk away. Both stations are ideally situated in the city’s heart, and you can rest assured that there are plenty of places to visit and transport options within walking distance.

As we mentioned previously, Liverpool is a perfect city for travellers coming into the city from another country. The people in the town are friendly and very welcoming to international tourists. We may be biased, but Liverpool city centre is one of the best city centres in the world. It offers many attractions, from famous landmarks to world-class shopping, dining, and fun entertainment. The city centre is well connected to other areas of the city with several transport considerations. As well as the multiple train stations mentioned above, you can find the city’s two largest bus stations at Queen Square Bus Station and Liverpool One Bus Station. You can also flog down a taxi or jump on board the LFC City Explorer bus. If you fancy a walk, it will take around 50 minutes to get to Anfield Stadium. The city centre is an incredible destination to experience the build-up atmosphere hours ahead of a big match, so we highly recommend you visit here before going to the stadium!

As one of the most well-known tourist destinations in the world, Liverpool does a superb job at catering to international visitors. Liverpool John Lennon Airport is the city’s main airport, with over five million passengers landing here yearly. The airport provides routes to over 70 destinations worldwide, ensuring you will have no trouble visiting the city no matter what country you’re coming from. After you’ve collected your luggage, you will find a local bus service or taxi outside the station which can take you to the city centre or straight to Anfield. The nearest train station is Liverpool South Parkway, providing you with the option to visit any key location in Merseyside. While Liverpool John Lennon Airport is the city’s largest airport, Manchester Airport is just a 40-minute drive away. Manchester Airport is one of the world’s busiest airports and will likely serve your country. You shouldn’t have trouble finding a direct or connecting route into Liverpool.

Are you visiting Liverpool by car? This is a convenient option that offers you the freedom to explore the city at your leisure. Liverpool is very accommodating to motorists, and the roads aren’t near as busy as London or Manchester, so don’t expect much congestion. However, the city centre can be bustling on weekends and peak times, as can the roads around Anfield on a matchday. You can access the city via highly-connected motorways such as the M57 and M62 or A-roads like the A580, known locally as the East Lancs. Some main routes into the city centre include West Derby Road,  Edge Lane and Dock Road. Make sure to take notice of signs when parking, as certain roads may require a parking ticket or permit. There are several affordable multi-storey car parks scattered across the city centre. Parking around Anfield stadium can be a massive hassle on matchdays, so we highly recommend leaving your car elsewhere and instead opting for public transport when heading to the ground.

The Best Way to Get To Anfield on Match Days

If you are coming to the city on a match day, we must warn you that Liverpool gets very busy! After all, it means more than 50,000 people flocking to the stadium to see the Reds in action. Therefore, planning your journey is essential to ensure you don’t miss kick-off. The good news is that the city has an excellent transport infrastructure and is well prepared to handle Liverpool FC matches.

First of all, we don’t recommend driving to the game yourself! While this is an option, many roads around the ground are closed a few hours before kick-off, and traffic will be hefty in the run-up. If you decide to drive, you will have to leave plenty of time to find an available parking spot, and you may have to spend quite a fortune. Otherwise, it might be wise to consider public transport. Bus services run to the stadium regularly, including express services, with affordable ticket prices. You can choose to travel but train, but there isn’t a railway close to the stadium, so you may require a long walk or an additional option. If you dislike squeezing into a packed bus or train, you can consider a local taxi company like Delta or a black cab. However, prices may rise significantly on a matchday.

Our LFC City Explorer tour bus is one of the best ways to get to Anfield on matchdays. The bus will continue to operate during our running hours, taking you from the city centre to the stadium. However, with roads closed around the ground, our times may be affected – so please check before travelling. Fancy a long walk to the stadium? It will take around 50 minutes to get there from the city centre.

Once you have arrived in the city, the city centre is your best place for transport, and several routes connect to Anfield. One of the best ways to get to Anfield Stadium is, without a doubt, the LFC City Explorer Liverpool bus tour, which stops right outside the stadium. This LFC bus has been designed to enable tourists to catch the best sights throughout the city, including incredible views from Everton Park.

With LFC City Explorer, you can hop on and off at designated stops throughout the route, allowing you to take a sightseeing break before continuing your journey. This bus tour stops right outside the stadium before beginning the reverse journey towards the Royal Albert Dock Liverpool.

When visiting Liverpool, you have to visit the historic Royal Albert Dock! This is undoubtedly one of Liverpool’s best landmarks where you can enjoy watersport activities, enjoy a lovely breeze and indulge in delicious food. Our LFC City Explorer bus begins its journey here, so it’s a perfect place to relax before starting your journey towards Anfield.

If you don’t fancy boarding LFC City Explorer at the Royal Albert Dock, our next stop is just a short trek along the famous Liverpool Waterfront. Canada Boulevard is close to the ferry terminals, where you can catch lovely views overlooking the River Mersey. Not to mention it’s also the place to be when the magnificent cruise ships come into town! After you’ve had a stroll around the Pier Head, just hop on board the bus outside the Three Graces, consisting of the Royal Liver Building, Cunard Building and Port of Liverpool Building.

One of the newest and most exciting ways to get around Liverpool nowadays is with an electrical scooter. E-scooters have captured the attention of millions around the world due to their low costs, convenience, adrenaline-fueled experiences, and environmentally-friendly features. However, it’s essential to realise that e-scooters can be dangerous if not used correctly. The government is carefully monitoring the use of e-scooters with a pilot scheme involving Liverpool.  Hundreds of e-scooters are now available throughout the Liverpool region. The scooters are powered by VOI and can be activated with an app. You can find an e-scooter at several sites around the city, allowing you to travel anywhere in Liverpool, including Anfield stadium. The scooters can achieve a speed of 10mph and automatically reduce the maximum speed in certain areas for safety reasons. To ride an electrical scooter, you must be over 18 and hold a valid UK driving license. Should you choose an e-scooter to get to Anfield, remember to follow the road rules and keep yourself and others safe!

Now that you know how to get to Anfield, are you ready to plan your visit to the iconic home of Liverpool FC? Buy your LFC bus tour tickets online today…