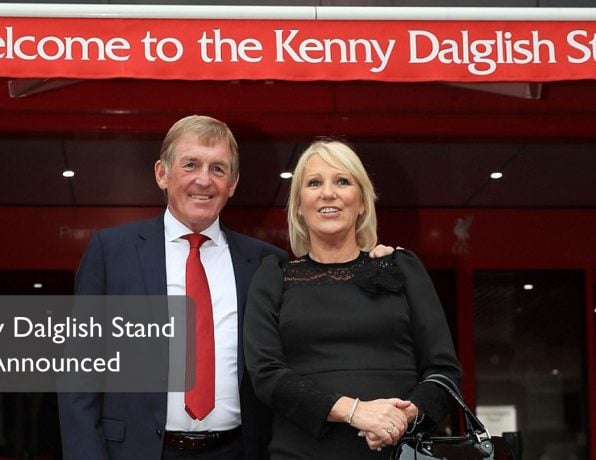 Liverpool Football Club has decided to rename the Centenary Stand in favour for the Kenny Dalglish Stand in recognition of his incredible contribution to the club as a player and as a manger.

Joined by his friends and family for the ceremony, Kenny gave this speech; “I’m hugely honoured to be recognised by Liverpool in this way. This is a club that means so much, not just to me, but to countless people who have contributed to it either through their ability as footballers, their passion as supporters or their commitment as owners and administrators. I just hope that the people sitting in the stand that bears my name derive as much enjoyment from watching Liverpool as I have had from playing for them.”

The decision to honour Dalglish was made by the club’s American owners, Fenway Sports Group (FSG)

Kenny Dalglish featured in 502 games as a Liverpool player in the years 1977 – 1990, scoring 169 Goals in all competitions as well as winning the following:

Kenny Dalglish’s contributions to the club were not only made on the pitch but also off it. During the Hillsborough Disaster of 1989 in which 96 innocent LFC fans lost their lives at an away game, Kenny provided support in the aftermath and the struggle for Justice to this day, highlighting his commitment to the club, fans, city and people of Merseyside.