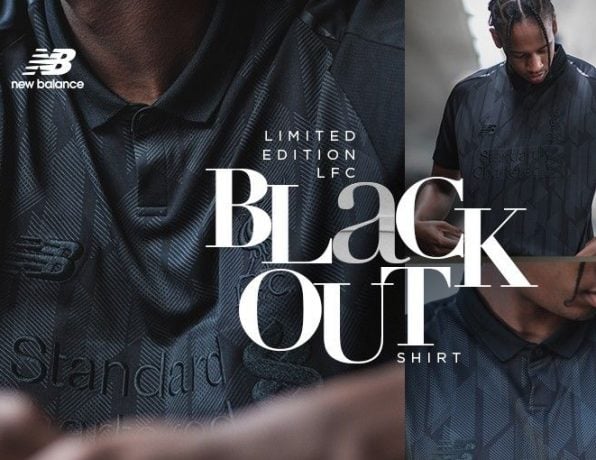 Looking for a different type of kit to show your support as a Liverpool FC fan? Then you’re in luck!

Other features of the Blackout home kit design included an all black v-collar and accentuated sleeve cuffs, both with subtle detailing, including black on black elements such as the New Balance logo, 125-years club crest and Standard Chartered shirt sponsor.

The new pitch black home kit received a positive reaction in terms of appearance but the £90 price tag certainly divided fan opinions on social media. The kit also came along with a pitch black collection, featuring pitch black hoodies, trousers, t-shirts and long sleeve t-shirts. This version of the 17/18 home kit was available to purchase on the official LFC store from the 21st of September.

Following the huge success of the Blackout home kit, Liverpool Football Club have now announced an all-new version for the current season. The new home shirt again resembles the red 2018/19 kit but has been re-designed with an all black style. A two-button polo collar has been reintroduced to provide the shirt with a lifestyle look, while the linear jacquard striped design has been influenced by the landmark architecture of the redeveloped Main Stand.

The Liverpool FC ‘Blackout’ home kit is now available to purchase from the official club store.

Keep up to date with the latest news and information, including tour times and dates, by following us on our social media profiles. You can like us on Facebook and follow us on Twitter.