Travel Updates:
Customers Please Note the Stop for the Shankly Hotel is no longer in use customers are advised to use the Bus Stop In St Johns Lane opposite Doctor Duncan’s Pub . Please note because of the home kick off on Sunday 19th the last bus up to Anfield will leave the dock at 1 pm. 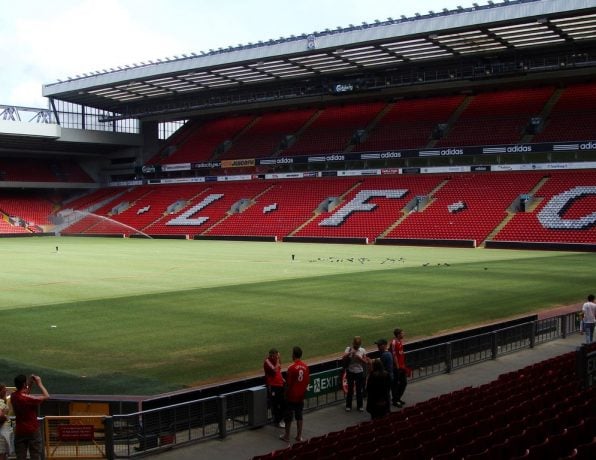 Soon after they purchased the club in 2010, Fenway Sports Group have consistently promised to place an Anfield Stadium development at the very top of their list as part of the effort of transforming Liverpool FC into one of Europe’s largest clubs. Following an extensive consultation process, the owners decided to expand the stadium rather than build a new ground. The initial announcement revealed plans to expand the Main Stand and Anfield Road ends to bring the crowd capacity closer to 60,000.

The spectacular Main Stand expansion was completed in 2016, bringing the stadium’s capacity to 54,000 along with brand new world-class facilities and a significant increase in revenue. Understandably the owners decided to halt on further expansions to gauge the success of the new Main Stand with re-development efforts focussing on Liverpool’s forthcoming move to a new training ground in Kirby. With the huge success of the Main Stand expansion and the club’s ongoing progress both on and off the field, attention has now turned to re-visiting the expansion of the stadium.

Liverpool Football Club has recently re-affirmed their commitment to re-developing the Anfield Road stand. The planning permission for rebuilding this section of the ground is due to expire this month and the club has no intention of renewing is due to a change in ambitions. The initial plans were to bring the capacity up to 58,000 with around 4,000 extra seats being added to the Anfield Road section. However, the club is now looking to increase the capacity beyond 60,000! This news should be music to the ears of supporters hoping to see a bigger and better home for the Reds – and we can’t wait to see how the plans look.

Regardless of when the Anfield Road stand is re-developed and how much the capacity increases, we look forward to welcoming more visitors from far and wide on our official LFC tour bus!

The Best Football-Related Activities in Liverpool

Liverpool is a city that is crazy mad about football. You only have to be in the city on Merseyside...

Did You Know? Interesting Stats & Facts About Liverpool FC

Liverpool FC Facts & Stats Do you consider yourself to be the ultimate Liverpool FC supporter who thinks they know...

If you consider yourself a Liverpool Football Club fanatic, you will no doubt be craving the opportunity to treat yourself...

Looking for a different type of kit to show your support as a Liverpool FC fan? Then you’re in luck!...