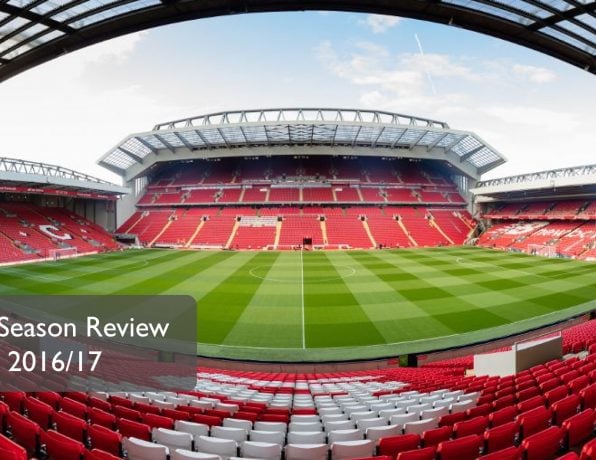 The Premier league 2016-17 season has finally came to an end and after another trophy-less season, the club embarked on a season to bring back the better times. Manager Jurgen Klopp said when he signed for the reds that he wants to turn the fans into ‘believers’ and after a very strong start to the season, every Liverpool fan was a believer as Liverpool and Chelsea where tipped to be early title contenders due to strong form and lack of European football fixtures to slow them down.

At the end of a roller coaster season,  The Reds managed to place in 4th position and qualify for next years Champions league playoff. Champions Chelsea ran away with the league in the second half of the season with a whopping 93 points followed by Spurs with 86. Manchester City achieved third place under Pep Guardiola’s debut season on 78 points followed by Liverpool on 76. Arsenal had an incredibly disappointing campaign as they failed to qualify for the Champions League for the first time in 22 years.

Goal of the Season:

In a season that was packed full of incredible goals, mine has to be none other than Emre Can’s incredible overhead volley vs Watford at Vicarage Road. Ironically on the first game after Liverpool FC have already picked their official goal of the season. The cross was supplied by Lucas who floated in a diagonal ball to Emre who provided a the magic to turn and perform his overhead wonder goal that was sent straight to the top corner, you only have to look at the stunned faces of the Watford fans who witnessed the world class volley in front of their goal.

Game of The Season:

Our personal favourite game of the season was Liverpool’s first vs Arsenal at the Emirates Stadium (14th August) that finished 4-3 to the reds. This seven goal thriller had everything, goals, drama and terrible defending on both sides.

After Simon Mignolet saves a penalty on from Theo Walcott in the first half, however he shortly redeemed himself by scoring with a low driven the ball into the bottom corner. Philippe Coutinho responded on the stroke of half time giving Liverpool momentum into the second half, as Adam Lallana scores to double the lead. In the 56th minute, Couthinho onece again popped up to score a third. New signing Sadio Mane bagged his first premier league goal for the reds with a sublime solo effort which was out shined by Arsenal’s Oxlade Chamberlain just moments later, spurring a late push by arsenal to make it 3-4 in the 75th minute thanks to defender, Calum Chambers. The last 25 minutes of the game where incredibly nervy for both defences as both teams missed more opportunities however Arsenal looked likely to score again however 5 minutes of added time was not enough.