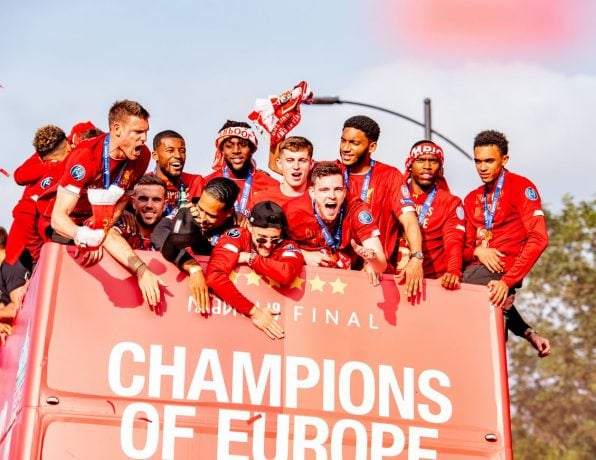 Last season was a spectacular ten months of highs and lows for Liverpool Football Club. Following big money defensive recruitments in Virgil Van Dijk and Alisson Becker, expectations were sky high. A club record-breaking 97 points weren’t enough to beat Manchester City to the Premier League but an emphatic comeback in the Champions League semi-final against Barcelona saw Liverpool march their way to a sixth European Cup in Madrid.

How could Liverpool top their previous campaign? The answer is clear. While the Champions League is the most sought after trophy in club football, Liverpool FC have their eyes on something bigger. It has been nearly 30 years since the club last achieved league title success and the feeling among the Anfield faithful is that there’s no better time to end that long wait than now. But how is the 2019-20 season currently treating Liverpool Football Club?

Liverpool FC started their season at Wembley, or ‘Anfield South’ as Reds would call it, to face Manchester City in the Community Shield. What is usually considered a gloried friendly perhaps had a bit more bite to it due to how close the two rivals came in the previous season. An entertaining game led to disappointment with Man City claiming a 5-4 victory in a penalty shoot-out. Liverpool dusted themselves off instantly and in a matter of five days kick-started the new Premier League season with a thumping 4-1 win at home to Norwich City. The team then jetted off to Istanbul for the UEFA Super Cup final against Chelsea FC. Goalkeeper Adrian had only just walked through the door when injury to Allison Becker allowed him to make a name for himself thanks to a penalty save which delivered Liverpool’s third Super Cup.

Fast forward to the end of September and things couldn’t look better for LFC. They started the season in winning fashion, picking up an impressive collection of points and walking through to the next round of the League Cup. The only blight, however, was opening their defence of the Champions League trophy with a 2-0 defeat to Napoli. In October, Liverpool were set to face their first defeat of the Premier League season at Old Trafford before a late equalizer from Adam Lallana kept their unbeaten streak rolling. The League Cup fourth round victory against Arsenal will perhaps be a contender for game of the season, only soured by the prospect of the next round’s tie clashing with the Club World Cup in December, a trophy Liverpool will hope to get their hands on for the first time.

Manager Jurgen Klopp knows his team best with the words ‘Mentality Giants’, a motto fast becoming this season’s mantra. Performances have not been spectacular but fighting spirit and determination to capture late wins has saw Liverpool place themselves nicely at the top of the table. The season took a whole new high in November when Manchester City were defeated at Anfield following an emphatic performance from the Reds. The never say die attitude from the team continued at the weekend with a late Roberto Firmino goal against Crystal Palace ensuring that Liverpool maintain a eight-point gap ahead of Leicester City and third-placed Manchester City.

What a season it is turning out to be for Liverpool Football Club! Not even the December fixture congestion could spoil the team’s good form. Liverpool kick-started the month with a thumping 5-2 victory other close rivals Everton FC followed by a comfortable win away to Bournemouth. On matchday 6 of the UEFA Champions League, Liverpool still had everything to play for to continue their defence of the trophy. The team were able to handle the pressure of avoiding defeat by securing a 2-0 victory against FC Red Bull Salzburg to top their group and qualify for a knockout tie against Atletico Madrid. They would later go on to sign Salzburg’s Takumi Minamino…

Due to fixture congestion, Liverpool had no choice but to strength a very young team in the League Cup quarter-final. The young Reds may have been beaten 5-0 by Aston Villa but they had every right to be proud of their performance. The first-team were in action the very next day, beating CF Monterrey 2-1 in the Club World Cup. After a goal from Roberto Firmino in extra time, the club beat Flamengo to lift their first ever Club World Cup trophy. High flyers Leicester City had emerged as one of Liverpool’s competitors for the league title alongside Manchester City, but it was Boxing Day delight for the Reds after a convincing 4-0 victory. With some assistance of VAR, Liverpool ended the decade at home with victory against Wolverhampton Wanderers.

The year started off with a hard-fought win against Sheffield United followed by a young team defeating Everton in the FA Cup courtesy of a Curtis Jones wonder-strike.  Games against Tottenham Hotspur and Manchester United proved to be solid tests that Liverpool overcame to strengthen their grip at the top of the table. Liverpool are currently an incredible 13 points clear of Manchester City with two games in hand. What will the rest of the season promise?

Looking for more fascinating Liverpool FC content? Browse our articles on Liverpool FC facts and the history of LFC.