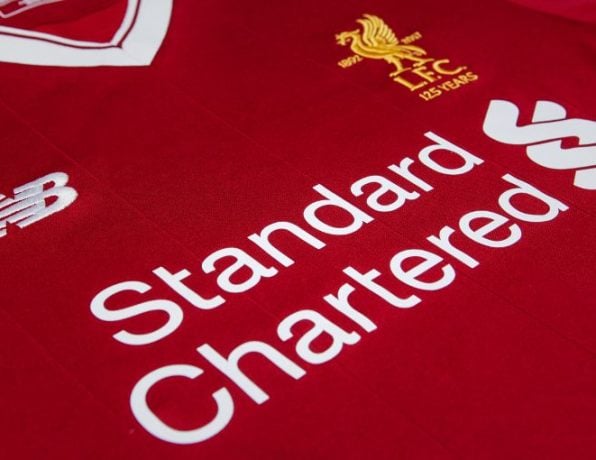 The New LFC Home kit for the 2017-18 season has officially been announced! This stunning new design is manufactured by New Balance and commemorates the clubs 125th anniversary and is available to pre order in store and online.

The 125th anniversary kit features a special commemorative crest, that has (finally) been stitched on to the breast of the shirt as well as the classic V-neck collar with white tips. The new home kit incorporates a much darker shade of red than last season. The new shade is named ‘Shankly Red’  and features a subtle tonal vertical pin stripe upon close inspection.

On the shoulders, we can find a commemorative stripe that features a small embossed ‘125’ emblem. Below the neck on the rear of the shirt lies the classic 96 emblem to commemorate the Hillsborough disaster. This emblem has been a prominent feature on all Liverpool Shirts since Warrior began the trend when in 2014-15 that is extremely popular with the fans.

The shorts also feature the embroidered crest as well as the New Balance logo, elasticated waistline and underpant lining. The socks feature a white tip at the top to match the white tips on the sleeves and collar, something that has been absent in Liverpool home kits since the Adidas era ~ 1995.

You can pre order the new LFC home kit now, if you do so within the next month, you will recieve a free £10 gift voucher with every shirt as well as guaranteed delivery by 19th of May! Feel free to visit the official LFC club store for more details.