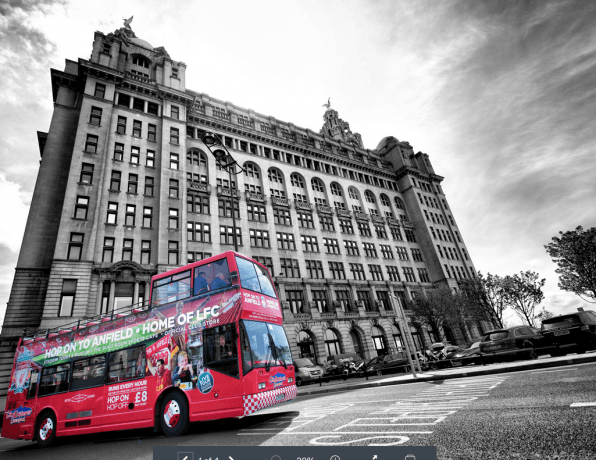 We don’t mean to brag, but we firmly believe our tour bus is the best way to get to Anfield. Here’s some of the top reasons why…

Travelling to Anfield is one of the best journeys to make as a football supporter. This famous area has been home to Liverpool Football Club ever since the club was founded all the way back in 1892. It is now one of the city’s most famous landmarks with tourists from across the globe flocking to the area so that they can experience this historic location for themselves.

For anyone who has never visited Anfield before, the trip to this iconic stadium is one of excitement and mystique. The stadium itself is not based in the bustling Liverpool city centre, but rather a short 2 miles away in a residential area. Upon arrival at Anfield, tourists are always left in awe after catching their first glimpse of this magnificent stadium. While the end result always deliver, we believe the journey to Anfield should be a special moment that builds up to your arrival at the ground.

With the LFC City Explorer tour bus, you are guaranteed to receive an experience that is tailored to Liverpool Football Club supporters. We have built this tour experience to offer supporters from across the world a real taste of the city.

When you hop on a local bus service or jump in a taxi, you risk missing a lot of what the city has to offer. The LFC City Explorer bus picks passengers up at central locations of the city, including the famous Liverpool waterfront, and with an open top design, you can enjoy breathtaking views as you head towards Anfield. This includes Everton Park which is well known for being one of the best places to catch stunning views overlooking the city centre! The tour is dedicated to taking you to the stadium with minimal stops, but without sacrificing sightseeing opportunities.

Anfield isn’t the only place to get your Liverpool FC fix. Our tour bus also stops outside the Shankly Museum in the city centre before it arrives at the stadium. The museum is a must visit for any supporter where you can soak in more of the club’s rich history and get up close and personal with never-before-seen memorabilia once belonging to LFC’s most iconic figures, the legendary Bill Shankly.

Unlike other transport options to Anfield, we have a dedicated live tour guide on board all our buses. This is the perfect opportunity for you to brush up on your knowledge of the city and the club before arriving at the stadium, as well as enjoying some of the popular scouse humour! Of course you also won’t be alone on the bus. You can mingle with other like-minded supporters who, just like you, are on the journey to discovering Anfield.

Our tickets cost just £8 for adults and £5 for children with a family pass also available. We believe that this is great value with a sightseeing tour, access to the Shankly Museum, a live tour guide and transport to Anfield all included. Not to forget that all tickets last for 24 hours. You can simply hop on and hop off at desalinated stops as many times as you like during your ticket’s duration.  Any other transport to Anfield can be costly and restrictive. LFC City Explorer is the ultimate choice for any supporter of England’s most successful football institutions.